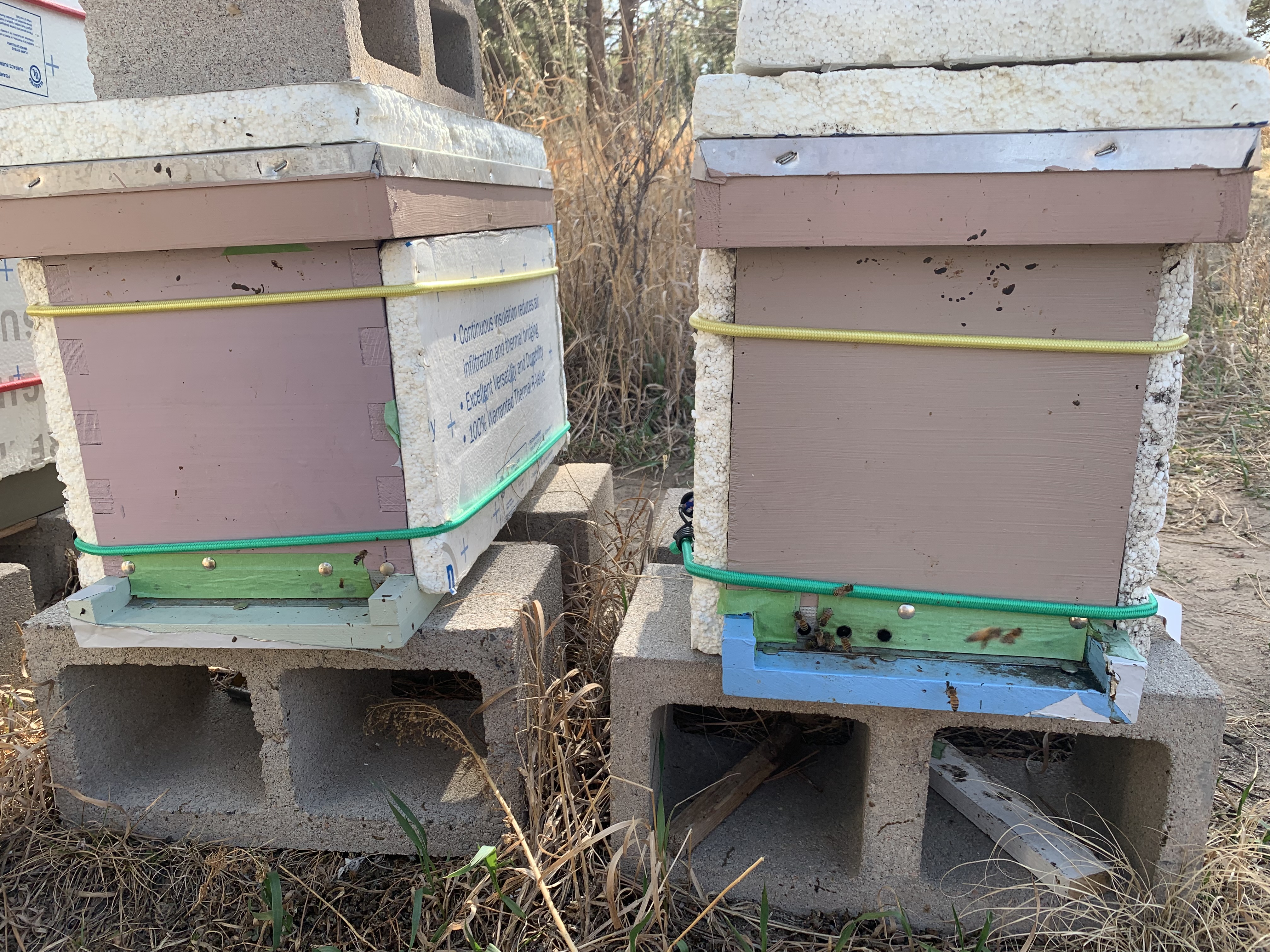 The Spring solstice is here and of course I am like a kid in a candy store this time of year. With a grin from ear to ear that no one can take off. So excited for the beginning of a new honey bee season with the rewards and challenges it always brings. As well as, getting all the last minute details done like painting boxes, prepping queen castles, repairing equipment, and bottling honey because there soon will be zero time for these activities. Managing honey bee colonies is a lot of time consuming work, but I love it so much! At this point of the year nearly all of our queens have began to lay eggs. I have not pulled any frames from colonies to see which queens are currently laying the most eggs, but do have some ideals based upon entrance observations & increasing number of foraging bees. This Winter has been fairly mild in my opinion and didn’t start to really get cold into very late in the season. Of course, in CO it’s always a roller coaster ride of bitterly cold days mixed with beautiful warm Spring like sunny days, and some high wind fire danger warning days.

We went into this Winter with forty-five hives, and still have a goal of ultimately managing around fifty-five hives. Three of these were experimental stand only five frame nucleus colonies that were wrapped with insulation. I was curious of how small of a healthy hive could survive a CO Winter with a feeding shim. I am somewhat astonished that all three are alive! Thus far only four colonies have perished, and all of them were Varroa mite load or mite related viruses that ultimately killed them. Unfortunately, in one particularly colony only a softball size cluster remained with the queen and I could physically see mite frass on the comb & a few mites on the remaining bees. Probably not a coincidence that all four of these colonies were swarms captured from unknown sources last year. Swarms tend to be a big hit or a big miss in my apiaries. I believe this is mainly due to not knowing how/if the mother colony was managed. As well as, my lack of conducting mite counts, or blindly treating for them with chemicals. For instance, if they originated from another beekeeper who constantly did some type of chemical Varroa mite treatment, it will be extremely difficult for this swarm to survive long term without those treatments. However, when I can capture a swarm, or a swarm moves into a swarm trap from known colonies that are not managed or treated for Varroa mites, they tend to survive multiple seasons, and we eventually propagate from them. Of course, this has to do with there genetics, and the fact that they can deal with Varroa mites on there own without beekeepers’ intervention. Either way, I think I am going to start doing mite counts on these type of colonies. If nothing else, it will give me an ideal of the likelihood of them surviving there first Winter.

I am a little disappointed that we did not reach last year’s goal of increasing our hive numbers to fifty-five. Although, some days I still feel like how could I possibly manage another hive;) This year I will also need to make up for the four losses. Which brings our total Winter losses to ten percent. Our lowest Winter death rate to date (where’s the wood to knock on;). Since we did not meet our hive count goal from last year, I will keep it the same. This year I am certain we will meet or surpass fifty-five colonies by focusing on more queen rearing and splitting hives that are bent on propagating themselves. In addition, I will be bringing in some new queen genetics this year, certified pure Russians and old faithful Beeweavers. I am very excited to witness how they will adapt to my apiaries’ environment and management techniques. I will also be working on putting grafted queens, and/or cells into two frame mating queen castles this season, as opposed to putting them right into five frame nucleus or mini colonies. The ideal here is that it I will loose less resources if the queen does not successful make it back from her mating flight. If so, I can then just combine those two frames of queen less bees to the queen right two frames next to it, by pulling the divider.

Once Spring arrives, I will be updating how particular hives are doing and giving an update on hive numbers. It’s definitely a numbers game, because having more hives sometimes comes with more losses, especially if your management game is not up to par. However, I am confident we are working with good genetics and I am not discouraged, but determined to keep bees alive and productive off of mite treatments.