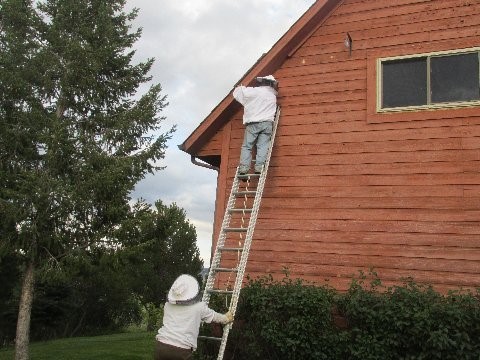 Carla contacted me when she noticed that a swarm of honey bees had taken up residence in her soffit. Since it had only been two days since their arrival, I assumed that they would have little to no comb built. Therefore, when Jesus and I arrived and dismantled the rear soffit and saw a mass of bees, we assumed that this was the swarm. So we vacuumed the mass of bees, sprayed some bee bandit in the cavity, and reassembled the soffit. Several days later Carla called again and said that she thought there were more bees than the few stragglers I told her that would remain before they dispersed. I asked her to send me a video of the “new” situation and after viewing it, I knew something wasn’t right. There were way to many “straggler” bees in the video and we had previous vacuumed all of the bees we saw, so we came back out to reassess the situation.

Once we arrived the homeowner insisted that there must be more bees in the side soffit, and said that this is initially where she saw the swarm trying to move in. We started by taking the back side soffit off again and inspected that area. Although there were no bees there, I could now see bees on the other side of the wooden rafter through a very small hole in it. That’s when I realized that what we previously vacuumed, was nothing more than a combination of bearding bees and congested bees trying to get through the very small hole in the wood to their colony on the other side.

After I realized this we came up with a new game plan to drop the bottom piece of wood on the side soffit which would expose the entire side cavity. In turn, I new it would expose exactly what part of the cavity they were in. Once opened, we found the colony in the top right corner of the side soffit, directly on the opposite side of the small hole in the rafter. It appeared that the piece of insulation that was once there had fallen to the bottom, so guess where the colony started drawing comb? They had quickly built five to six fresh new comb pieces, most of which already had eggs, larvae, pollen, and nectar in them. How quickly a swarm can build and fill combs of honey depends a lot on the initial size of the swarm that moved into the cavity. This swarm was obviously fairly large because it took them no time at all. Honey comb that has just been drawn is white and very fragile. It is a task to not have them fall apart when removing or sag when you rubber band them to a frame. However, we did the best we could relocating them from the soffit to the nucleus box without much damage to the comb and bees. Once we removed all the comb we vacuumed all the remaining bees and put them in the box with their comb. The next morning I added this nucleus box to the mass of bees we had previously vacuumed. I am certain they were happy to see the rest of their family.

Before we left Carla’s, Jesus stuffed the missing insulation into the cavity where it had fallen and the bees began their colony. He also added a little extra insulation to the bottom of the cavity. Afterwards we put everything back together and sealed any wooden parts that were susceptible to bees reentering.