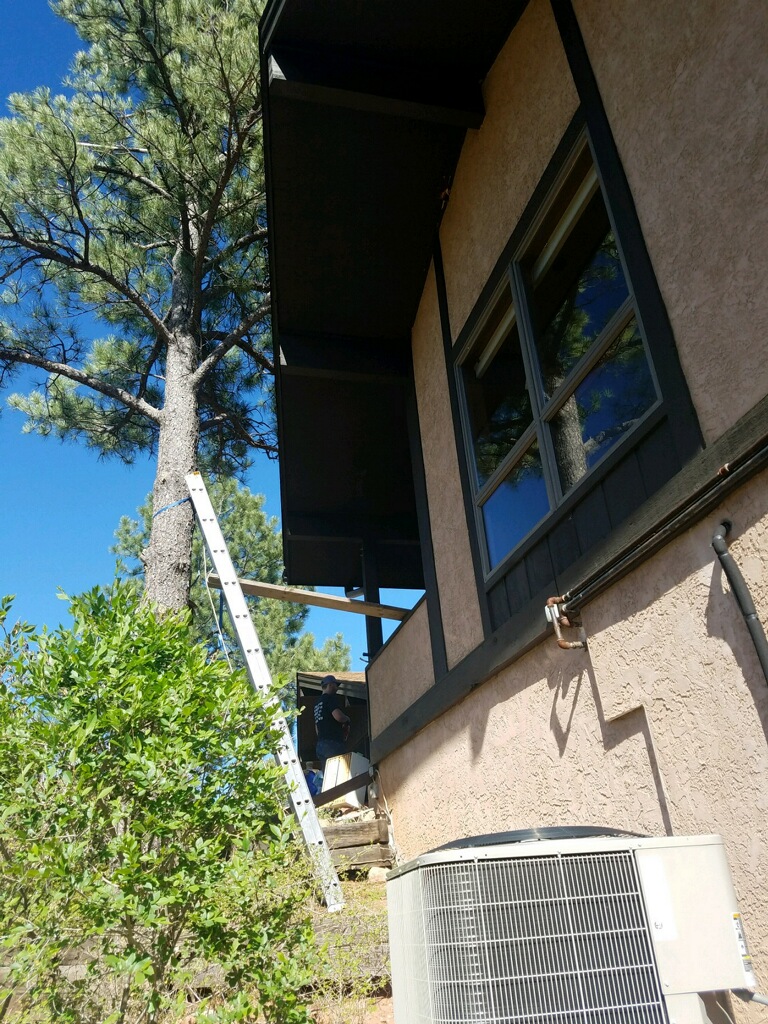 We were referred to the Calle Corvo Crew by Noah at High Country Pest Control. It is always great to come across pesticide companies who realize the importance of honey bees, and how destroying there colony in a structure is usually just a temporary fix.

After meeting the homeowners and doing some preliminary work it was discovered that the colony set up there new home in one of their several soffit choices. One of the larger holes in the soffit and much further from the hive’s location was created by an animal previously who was trying to house itself in the soffit. The other hole which was the colony’s main entrance was just enough space for two bees two enter/exit at a time. Which is why I suppose this colony used both holes, even though the larger hole was at least five feet away from where there colony was.

We were determined to try to get the plywood under the soffit off in one piece, but one of the ends was further away than we could safely reach from the porch. Ryan Brown came up with an interesting, but extremely dangerous idea of strapping the extension ladder to the tree and then using a plank across the ladder and porch ledge to access the outer side of the soffit. I would have never thought of this, mainly because the danger level of this would have blocked the idea out of my mind. However, it worked very well and he safely returned to the ground after we got the plywood off in one piece. Once the colony was exposed we had the luxury of working on a ladder from the porch to reach and relocate the colony. This was still somewhat difficult because we had to track up and down the ladder with combs of bees. After removing the colony and relocating them to their new hive body we began cleaning up all of our work areas.

The homeowners of the Calle Corvo Crew decided that they could put everything back together, and fill and seal the cavity. Therefore, we discussed the specifics of this and of course fixing and sealing the colonies original entrances/exits. Overall, as the first removal of the Spring of 2017, I think it went extremely well.