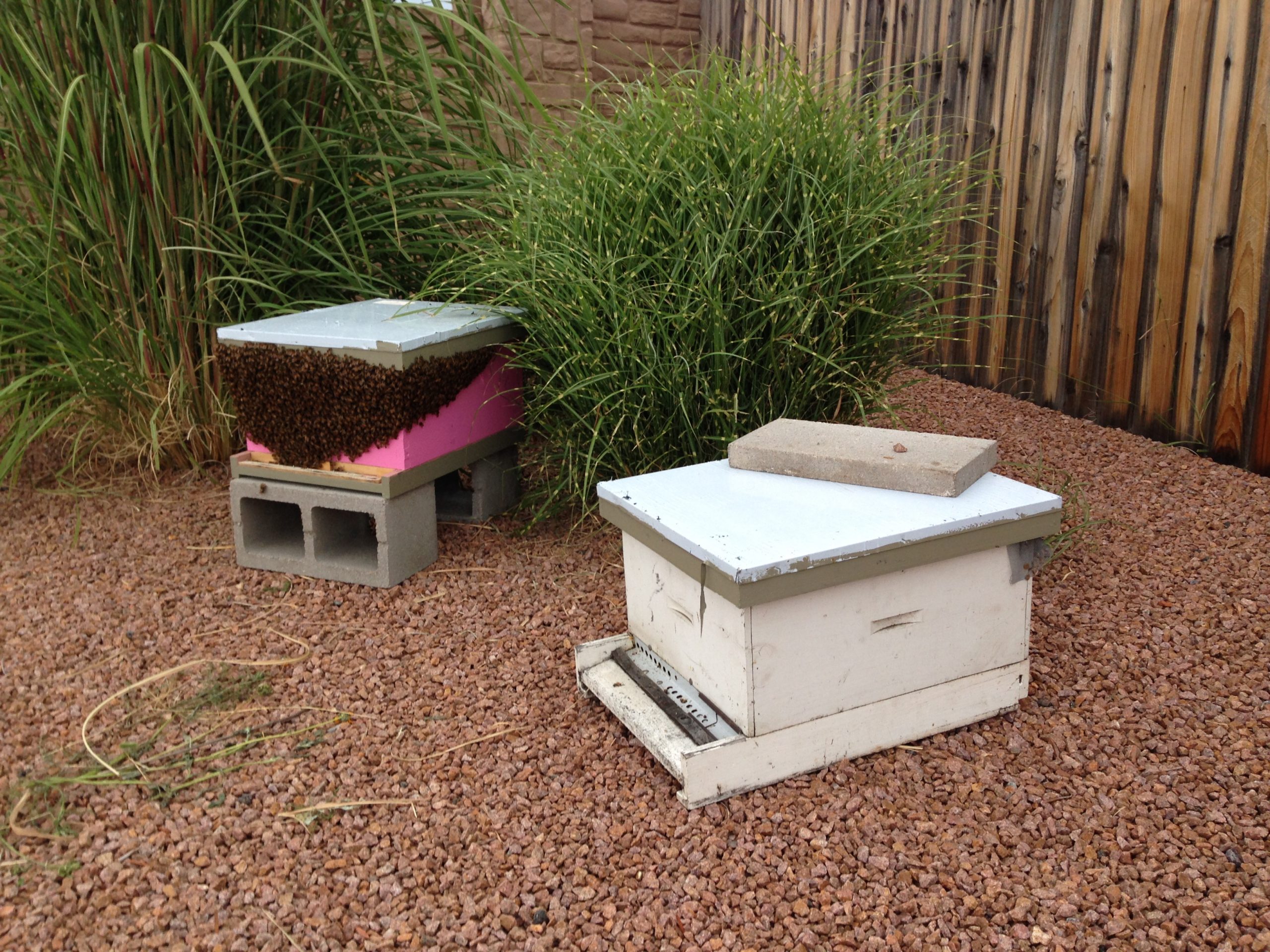 This Winter has actually felt more like a Colorado Winter, especially compared to last year. Although it started out quite warm we have had some bitterly cold stretches, and recently some 90+ mph winds. These winds blew over tractor trailers around the city like they were tumbleweeds, so I wasn’t terribly surprised to find two nucleus colonies blown over as well. One colony was a triple deep nucleus and the other was a four deep nucleus colony. Once they become this tall the wooden ware becomes inherently unstable (think tall & skinny), and with wind like that they definitely needed more cinder blocks (weight) on there top covers to prevent them from falling over. Both of these colonies were in the Broadmoor area which seemed to get the highest gusts of wind within the city. Luckily, I suspected that I needed to do some out yard checks to ensure that every hive was still upright after the brutal winds. Upon arriving, it appeared that one of the nucleus colonies was blown over onto the next one, creating a domino effect. The hive bodies stayed mostly together, but of course they were on there sides. Most of the bees stayed clustered on the frames in the boxes, but were exposed to the brisk air and wind. I also noticed one small clump of bees on top of the frames that appeared to be dead, hopefully there queen was not in the clump, or the hive will most likely perish due to being hopelessly queen less. It would be extremely rare for them to make queen cells (if there are any eggs) and have her successfully hatch and get mated in the heart of Winter.

Again, this year, rather than trying to keep them warm, I put more emphasis and energy on making sure the hives were healthy and had plenty of honey stores going into Winter.

Therefore, the only hives I insulated were the nucleus colonies and colonies that occupied only one or two deeps. I felt that these bee populations would benefit from having the extra R-Value created by the one inch foam insulation on the back and sides of their boxes. In addition, all of our hives have an insulated top cover on them year round. In the Winter this keeps condensation from dripping down onto the Winter Cluster.

The smallest nucleus colonies this Winter are two deeps and several of them are three and four deeps. Which in reality makes the larger ones more like full size hives. I will closely monitor there weight as Winter progresses and exchange any of their empty frames with full frames of honey before Spring. I don’t want them to starve!

We went into this Winter with only forty-seven colonies, and four have perished since then. Three of the four had a heavier mite load than the bees could manage, and the fourth literally had honey/nectar oozing from the entrance. This was the first time I had ever seen this, and this too may have had something to do with a mite overload prior to the oozing. I will know more about there demise once I do an autopsy on the hive, which is currently just screened off to keep the hives around it from robbing it dry. We came closer to reaching last year’s goal of increasing our hive numbers to fifty. However, again this year it eluded us, but we came much closer than the previous year. I think we need to increase the hive count goal to more than fifty this year since we are so close to this monumental goal.

Going into this winter our hive numbers were higher than last years, but still slightly off our goal. Since we did not hit our hive count goal from last year, I will increase it to fifty-five. However, this year I am certain we will meet or surpass fifty-five hives by focusing on more increases and holding on to more of our overwintered nucleus colonies. We will only sell one more before they will be sold out until next April 2018. However, we will still have several Spring nucleus colonies available.

We also filled the new apiary in the Broadmoor area and had our first harvest from some of the colonies there this Summer. The nectar flow from this apiary was pretty robust even with a mid summer drought of nectar. In addition, we obtained a new out yard in Fountain which looks promising. This is also the out yard where I had my first swarm refuse to enter the pink Langstroth box I provided for them. At first I thought maybe they didn’t like pink;), so I offered them a white set up, but they refused that box also and went back to collect on the outside of the original pink Langstroth box I first offered. The next day they were still hanging out on the outside of the box, and I didn’t have time to make sure they stayed in another setup, so I gave them to a friend. After using my bee vacuum to collect them and transport them to my friend’s house, I noticed all of the little wax particles they began to draw on the outside of the box (see picture). He too had a difficult time anchoring them, so that made me feel a little better.

Once Spring arrives, I will be updating how particular hives are doing and giving an update on hive numbers and total Winter losses. Hopefully, our Winter losses will be the same or less than last years, which was around 12 percent.