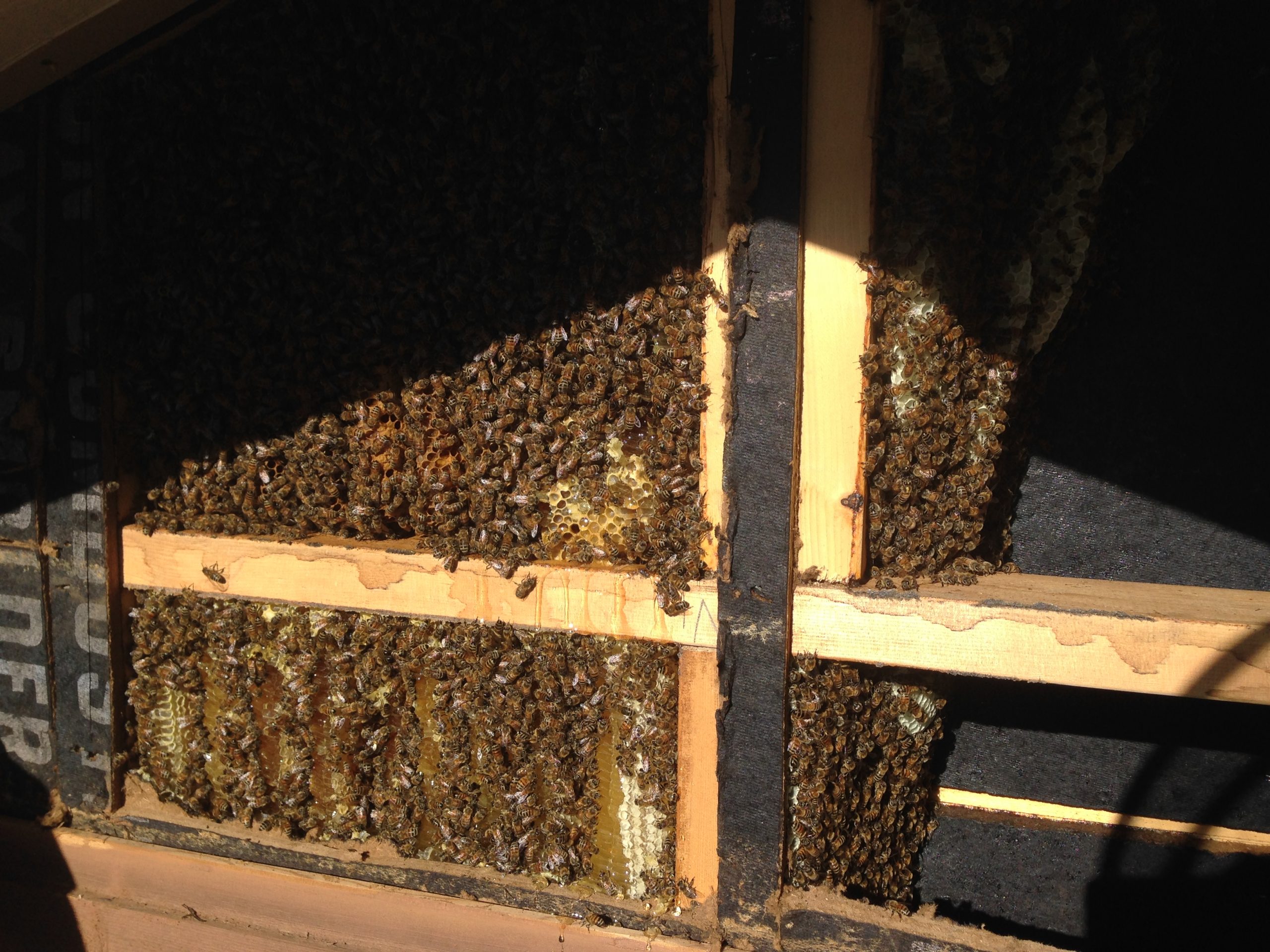 This was the last removal that we completed for the 2015 season. There is always a risk of a colony not surviving the removal/relocation. But, the odds dramatically increase against survival, the later in the season the relocation is done. This is mainly because the colony does not have ample time to restructure, restock, and rebuild any frames that are not completely full before the first frost. Therefore, unless its an emergency, we try not to begin any honey bee colony relocations after the end of August.

However, we always start a Spring priority list for the following year. As the new season begins, these are the first colonies to be relocated in the Spring. Unfortunately, The Medford Crew was actually relocated in mid- September, due to scheduling conflicts and identifying the best way to remove them. Since it was so late in the season, it will be interesting to see if they survive their first Winter in managed boxes. So far, so good.

After identifying the location of the colony, it took us several more visits to determine, and discuss with the homeowners, the most economical way to relocate the colony. One of the issues, with relocating this particular colony, was how the house was built. And, where within the structure the bees called home. As this section of the house had a protruded bay window, we could not set up level scaffolding due to the exterior walls and a secondary roof line.

When this happens, many homeowners next suggest we use ladders. And, when I say no thank you, they wonder why. The reason being it is nearly impossible, and extremely dangerous, to relocate colonies from ladders. Especially, when you are 20 feet or more off the ground and the bees become angry and we start getting stung. In addition, there is usually no where to set the tools, vacuum, hive bodies, and frames. Not to mention, one has to go down and back up the ladder, after cutting each section of comb, to put it and the bees into a frame and the hive body.

Because it would have been the most economical, I suggested removing the colony from the inside. This idea usually does not go over well with homeowners: initially, it always meets resistance. But, many times it is the most inexpensive way, especially when it comes to repairs. Also, depending on where within the structure the colony is located, sometimes it is the only way to remove the hive. In the Medford Drive Crew’s case, an inside removal would have been in the homeowner’s master bedroom. We always set up a containment area for inside removals, but the queen of this castle wanted to have no part of an inside removal.

Therefore, for us to do this removal, the only other option was for the homeowners to lease a boom lift.
This was the first time we have removed a hive from a boom lift, but I imagine it won’t be the last. One issue with leasing any equipment is that you’re usually on some type of time frame to get the equipment back. Obviously, the sooner the equipment is back the more money is in one’s pocket. In the haste to get the job done and equipment returned, I believe mistakes can be made. Fortunately, the homeowners did not put any added pressure on us to finish the job in an expedited way. They even took part in the removal process. We managed to remove the hive in half of a day, loaded them up and left.

But the rest of the plan changed shortly afterwards. Initially, we were contracted to just remove the hive and the homeowners were going to do their own repairs. After removing the hive and contacting them later on that evening, to discuss straggler bees, I could sense they were overwhelmed on the “what to do next part”. Once I realized this, I offered to come back over, while they still had the boom lift, to vacuum up any remaining bees and “fill and seal” the area.

They took me up on this and we had the cavity ready for plywood, tar paper, and the exterior cedar, sometime that night. The next morning, Jesus came over to button everything back up on the exterior walls. Fortunately, he was able to reuse the majority of the materials that were taken off, due to our taking them off properly.