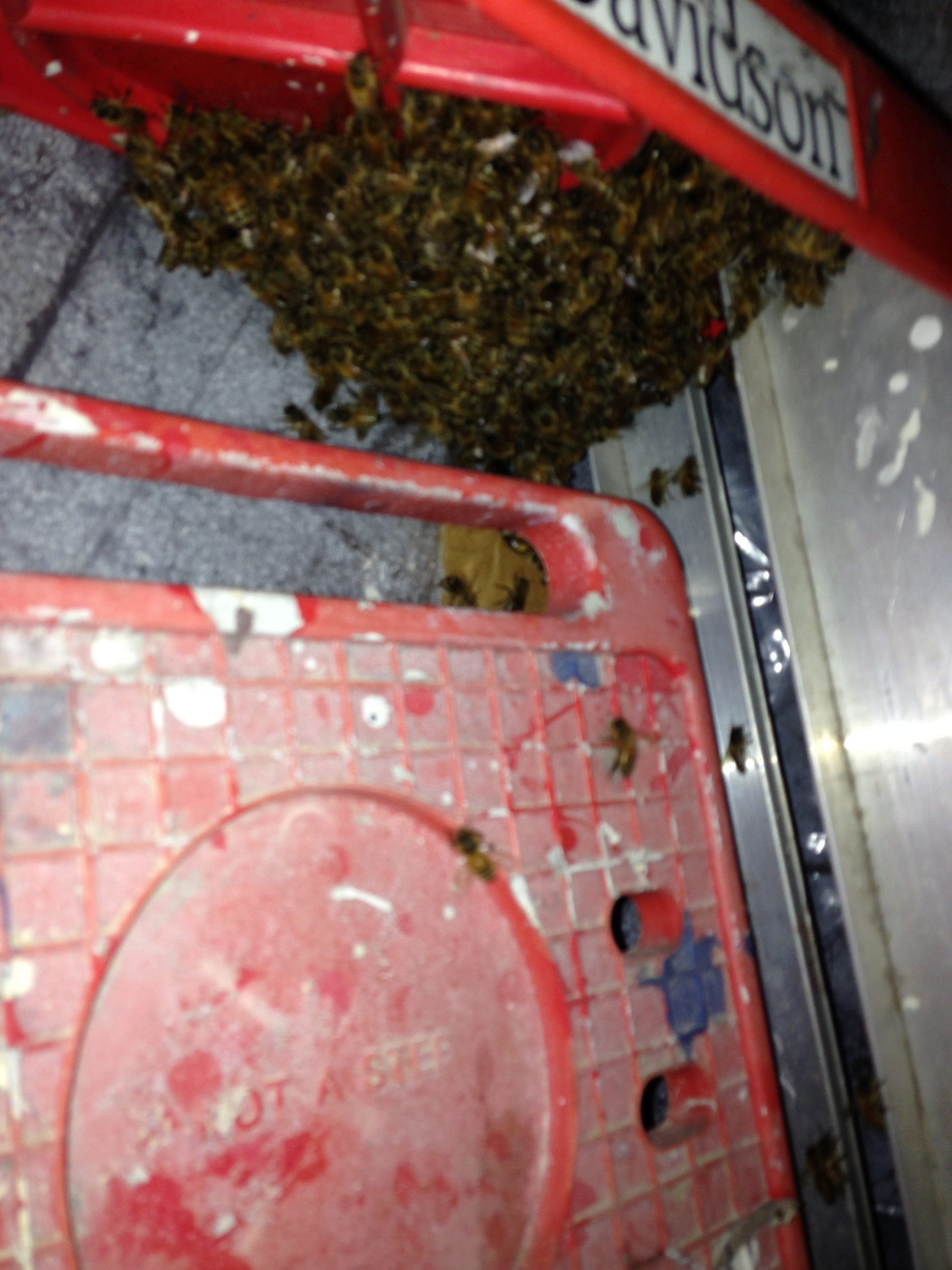 The crew had been actively residing in the Diller’s home for at least five years. Our job, in the removal process, was simply to locate where they were in the structure, help demolish the plaster and lathe and, of course, remove the colony.

Mr. Diller said he would set up the containment area and cut the wall. When home owners say this I am usually a little skeptical, as the containment area has to be well set-up so straggler bees can’t find their way out. In addition, I never know how homeowners will react when bees actually begin flying around, dive bombing them and, of course, eventually stinging them.

Let’s just say that Mr. Diller’s containment area gave mine a run for its money. It, by far, exceeded my expectations and I also learned a few new tricks. Not to mention, he has great bee charisma and didn’t freak out as bees came out and investigated, stung, and dive bombed us as we cut, banged, pulled, and eventually removed a large section of the interior wall.

The way this colony set up their hive, within the structure, was by far the coolest and most interesting I have ever seen. The colony took up two, 16 inches by 4 feet long sections of the wall. Within these two cavities were three layers of comb top to bottom, side to side. However, the section on the left was strictly brood, pollen, and enough honey to feed the eggs and larvae. The section on the right was strictly capped honey. At first, I began to wonder how in the world did the bees cross over from one section of the hive to the other, with the vertical studs in the wall? I imagined that during the Winter all of the bees moved to the honey section to sustain themselves, but how?

Considering the excessive amount of honey this colony had (by far the most I have seen in any removal) we decided to put the first comb layer in the boxes with the bees. The middle layer went to the homeowners. The third, thinnest layer went in a container.

One potential problem, with putting all of the honey in the boxes with the bees, is when you cut them out the edges become uncapped and drip. Sometimes, they are also extremely fragile and you have to be very careful not to smash and uncap the combs, because this also leads to dripping honey. If these dripping frames of honey are put on top of brood, eggs, larvae, and bees, it makes for a potential sticky disaster that the bees can not overcome. However, it is still very important that a majority of the honey gets in the lower boxes with the bees, so they have enough food to continue to feed their young, and fuel to begin the process of restructuring their new home.

We managed to get this colony into two deep hive bodies working until close to midnight the first day. Thank you Mrs. Diller who made sure we had something to eat and drink, when we got out of our protective gear. And, a very tasty spicy casserole the next day.

The hive appears to be taking a liking to their new digs and have started the process of attaching combs to the frames and dragging out rubber bands.