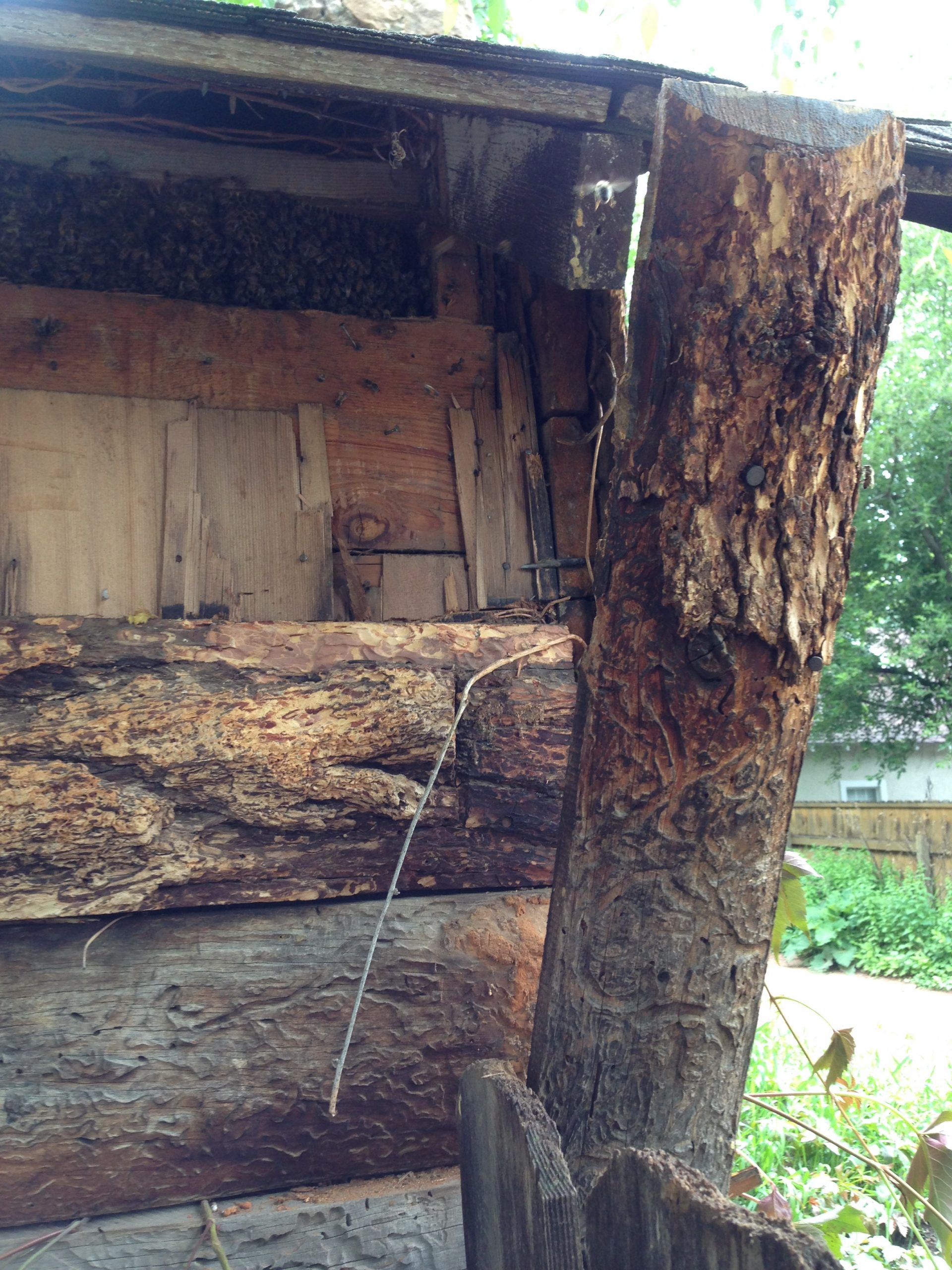 All honey bee colonies, that move into structures, do not necessarily have to be relocated. This is especially true if they are in a structure outside your home like a barn, outside pillar, or shed. As long as they are not a nuisance, do not pose a threat to someone who is allergic, their entrance/exit (flight path) is not by a main doorway, or in a chimney that is not used frequently, one could decide to do nothing about the situation. As long as the feral colony remains alive, it  could reside in that space with little or no damage to the structure. However, this does mean that over time they will expand their colony, until the cavity is maximized with their living quarters and then begin to cast swarms.

The Tucker Crew is a colony that the homeowners decided to “let them bee”. After initially locating this hive for the Tuckers, we quickly realized that it was a large colony that had minimally crossed over to the adjacent side of the structure.

The initial plan was for Mr. Tucker to expose the majority of the hive. So, I left him with some protective gear and gloves. Then we would cover the partially exposed hive with a tarp, until it was completely exposed. At that stage we would begin removing the colony.

Mr. Tucker had no interest in removing the colony from the inside. Although I thought it would have been much easier, he didn’t necessarily see it that way. And, ultimately, he may have been correct. Regardless, it was decided to relocate them from the outside.

After he began taking off the initial outer siding logs, it was discovered that there were still two additional layers, that needed to come off, before reaching the colony. He removed all three layers of wood in one small section. At this point, he began debating if the relocation of this colony would be worth all the time, labor, and effort.

I think Mr. Tucker may have had some concerns about putting the structure back together to its original state. Personally, I thought that would be the easiest part of the whole ordeal. Based upon the uniqueness of the structure, it should have been fairly simple. In previous removals, where siding needed to fit back into its original space, we just used a simple labeling system as it came off. Using this system, when it was time to put the structure back together, we would know exactly where each piece should fit. Of course, this system does not take into account any splits, cracks, or breaks in the wood as the structure is disassembled and reassembled.

Ultimately, the Tuckers’ decided not to relocate the colony in their work shed. Before the small exposed section of the hive was reassembled, I cut a chunk of honey comb for them to try. This honey comb, coming from their very own hive, is always special.

Apparently, the hive had been there for some time: hopefully, it will prosper for some time to come.
In the Spring, I’ll talk with Mr. Tucker about putting up a swarm trap in the yard. I have hopes the hive will eventually swarm and move into my trap.