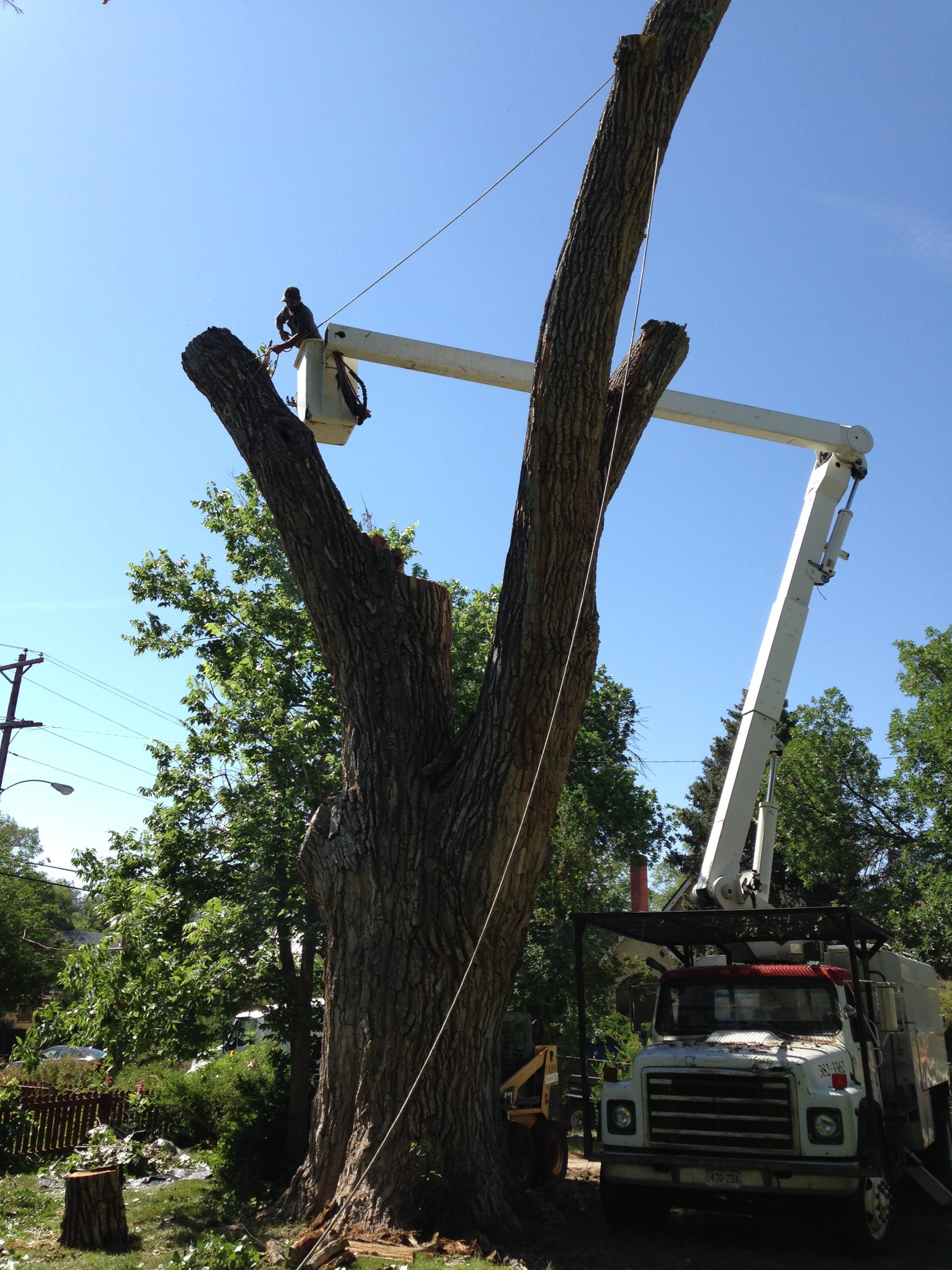 I was contacted by Gilbert, who owns and operates Gilbert’s Tree Service, whose crew is known as, “The Tree Guys”. It was a pleasure to work with him and The Tree Guys on this project and I look forward to seeing and working with them again.

This cotton wood tree was estimated to be over one-hundred years old, and its size was massive. The pictures, unfortunately, just can’t really show its true size. It was known that the tree had two different honey bee colonies before cutting commenced.

We were contacted to help remove the second colony. It was located on one of the upper branches which were easily 70 feet off the ground. After discussing the plan with Gilbert and The Tree Guys, Gilbert put on a bee suit as he was doing the cutting. Ropes were tightened and the cutting began.

My hopes were that the tree would make it down to the ground without splitting. We didn’t want to be forced to relocate them from their original hive. The limb/hive took a good hit to the ground, but remained in one piece. The bees had a really good temperment considering what had just happened to their hive. In fact, The Tree Guys didn’t even use the extra suits I had brought. Once the hive was down, we removed loose pieces of comb and put a piece of screen on the bottom and top. Gilbert then grabbed the hive with his caterpillar and set it temporarily upright. It was then moved to the Paxton’s out yard.

Unfortunately, the hive was loaded with its top at the end of the truck’s tail gate. So, to set it upright as the bed lifted, would have put the hive upside down. Due to its size, any attempt to set it upright, in the correct direction, didn’t work. The Tree Guys spent several hours attempting, with a series of chains, metal bars, brute strength, and the lifting action of the truck’s bed. (Gilbert, I’m sorry about the broken metal parts on the truck’s bed.) In the end, the limb was set on its side for a few days and Mr. Paxton saved the day, with a connection that he had for a crane.

This actually worked out well. It gave us time to build a top and bottom for the hive. The artwork was inspired by the Paxton/Katava out yard homeowners. The tree’s thin beard (carpet strips) were added a few days late, due to raccoon sightings.  At night, raccoons will come to hives and “scratch” at the front door. When the defense line, of honey bees, comes out to protect their home, raccoons will have a feast. The strips have sharp nails to help keep predators away, particularly when their paws hit those nails.